Gentrification and the right to the Geomedia city 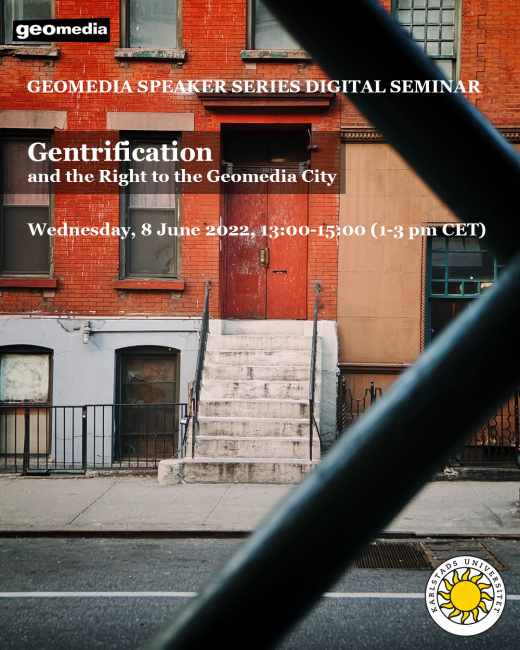 Gentrification and the right to the Geomedia city

The seminar explores the role of media in urban gentrification processes. The three presenters are contributors to a new special issue of Space and Culture (guest editors: Maren Hartmann & André Jansson), in which seven articles investigate how gentrification is shaped and underpinned by the normalization of various media platforms, and what these media mean to the resistance to gentrification in cities around the world. The “geomedia city” refers not only to the digital infrastructures built into urban environments – circulating and embedding data – but more crucially to the social and cultural dynamics whereby certain norms, skills and forms of capital (and thus people) are legitimized (or marginalized) in the city.

PhD candidate in the Department of Media Studies and member of the Centre for Urban Studies, University of Amsterdam

Assistant Professor at the Department for the Study of Culture, University of Southern Denmark

13:05-13:15
Introduction, André Jansson, Professor in Media and Communication Studies and Director of the Geomedia Centre

13:35-13:55
Jelke Bosma: The gentrification of Airbnb: Closing rent gaps through the professionalization of hosting

14:05-14:25
Maja Klausen: On the geomediatized margins of digital citizenship: Exploring the gentrified and digitalized lived spaces of older Danish citizens

In the contemporary media city (McQuire, 2008), murals can become symbols of both heritage and divisive gentrification processes, offering ways to explore issues of social justice in mediated public space. Taking the case of Detroit, USA, a cultural justice perspective is used to explore the question how the urban imaginary of the ‘music city’ is mediated through street art, and its meaning reconstituted and reframed in the contemporary networked mediasphere. A selection of Detroit music murals, their Instagram life and the public debates surrounding three specific street art projects are analyzed along 1) the symbologies of place the murals represent, 2) the historiographies of space attached to the murals, 3) the social ties and community networks that keep the murals in place or protest their presence. The proposed cultural justice framework offers an opportunity to more fully understand how cultural materialities such as murals shape mediated public space in areas of gentrification.

Leonieke Bolderman is Assistant Professor in Cultural Geography at the University of Groningen, The Netherlands. In her research she focusses on the role of art and culture in urban development, with a specific interest in heritage, tourism and music. She has published various research articles, is the author of the monograph Contemporary Music Tourism: A Theory of Musical Topophilia (Routledge, 2020) and the co-edited collection Locating Imagination in Popular Culture: Place, Tourism and Belonging (Routledge, 2021).

The Gentrification of Airbnb: Closing rent gaps through the professionalization of hosting

In this presentation, we argue that it is analytically productive to think about the professionalization of hosting on Airbnb in terms of (commercial) gentrification. More precisely, we believe that rent gap theory is particularly helpful to advance our understanding of why and how professionalized hosting has become an increasingly salient phenomenon and for centering the active role of Airbnb as a platform operator. We develop the notion of platform-scale rent gaps to explain the economic logic that drives Airbnb to professionalize its hosts and gentrify its platform. We then discuss Airbnb’s professionalization programs and tools, showing how some of its most substantial resources primarily cater to large-scale property managers who, like Airbnb itself, seek to identify and close rent gaps on the platform. This consequently creates the conditions for uneven business development opportunities among hosts, which we illustrate by focusing on how two different types of hosts have sought to professionalize their business in Berlin. Finally, we conclude by speculating on the relationship between the gentrification of the Airbnb platform and urban gentrification.

Jelke Bosma is a PhD candidate in the Department of Media Studies and member of the Centre for Urban Studies at the University of Amsterdam. His PhD project looks into dynamics of value related to platform-mediated short-term rentals on Airbnb. He has a background in urban studies and his research interests include platform urbanism, housing, and urban theory.

On the geomediatized margins of digital citizenship: Exploring the gentrified and digitalized lived spaces of older Danishcitizens

In this talk I approach the Danish digitalization strategy as a Lefebvrian conceived space, focusing on how its ideology and spatial codes denote a normative vision for how citizens should and ought to be. Drawing on the non-mediacentric concept of geomediatization and a feminist new materialist approach to gentrification as assemblage the talk explores parts of the lived spaces of older (64+) marginalised citizens living in Sydhavnen, Copenhagen, an area currently undergoing gentrification. By focusing on the interplay between digitalization of the public sector and urban gentrification focus is placed on an emergent power geometry in which the potential for belonging is carved out differently for different citizens.

Maja Klausen is Assistant Professor, PhD, at the Department for the Study of Culture, University of Southern Denmark. Her research explores citizen perspectives on (in)equality in the digital society. Combining media- and cultural studies theories and approaches she has published on the interplay of mediatization, urban space and subcultural play and practices, digital citizenship and old age as well as digital patienthood. She is moreover part of the project Datafied Living, University of Copenhagen (funded by the Independent Research Fund Denmark and the European Research Council), where she explores the datafication of patienthood.