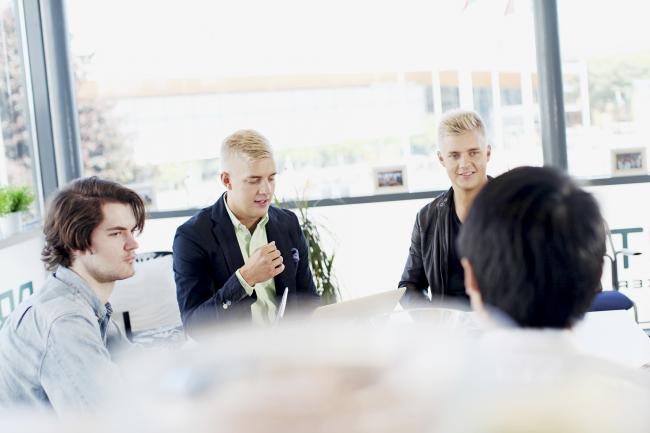 Subscribe to the KAAS calendar and stay updated automatically. Copy the link and add it to your online calendar.

The seminar series for the academic year 2020-2021 has ended. We thank you for your enthousiasm and participation, and welcome you back in September 2021.

Abstract: A fully discrete approximation of one-dimensional nonlinear stochastic heat equations driven by multiplicative noise is presented. A standard finite difference approximation is used in space and a stochastic exponential method is used for the temporal approximation.
This explicit time integrator allows for error bounds in $L^p(\Omega)$, uniformly in time and space. Furthermore, uniform almost sure convergence of the numerical solution is proved.
Numerical experiments are presented and confirm the theoretical results.
The presentation is based on a joint work with Rikard Anton (Umea University) and
Lluis Quer-Sardanyons (Universitat Autonoma de Barcelona).

Abstract: In this talk I will explore the notion of a reconfiguration of political space in the context of the rise of populism and its effects on the political system. I will focus on Germany and the appearance of the new right wing party "Alternative for Germany" (AfD). The idea of a political space is closely connected to the ubiquitous use of spatial metaphors in political talk.
The idea of a political space is closely connected to the ubiquitous use of spatial metaphors in political talk. In particular the idea of a “distance” between “political positions” would suggest that political actors are situated in a metric space. Using the electoral manifestos from the Manifesto project database we investigate to which extent the spatial metaphors so common in political talk can be brought to mathematical rigor. Many scholars of politics discuss the rise of the new populism in Western Europe and the US with respect to a new political cleavage related to globalization, which is assumed to mainly affect the cultural dimension of the political space. As such, it might replace the older economic cleavage based on class divisions in defining the dominant dimension of political conflict. An explanation along these lines suggests a reconfiguration of the political space in the sense that (1) the main cleavage within the political space changes its direction from the economic axis towards the cultural axis, but (2) also the semantics of the cultural axis itself is changing towards globalization related topics. In this paper, we empirically address this reconfiguration of the political space by comparing political spaces for Germany built using topic modeling with the spaces based on the content analysis of the Manifesto project and the corresponding categories of political goals. We find that both spaces have a similar structure and that the AfD appears on a new dimension. In order to characterize this new dimension we employ a novel technique, inter-issue consistency networks (IICN) that allow to analyze the evolution of the correlations between the political positions on different issues over several elections. We find that the new dimension introduced by the AfD can be related to the split off of a new "cultural right" issue bundle from the previously existing center-right bundle.

When: T.B.A.
What: Topological and Interfacial Effects on the Glass Transition in Confined Polymers
Who: Alexey V. Lyulin, Department of Applied Physics, Technische Universiteit Eindhoven, The Netherlands
Where: T.B.A.

Abstract: Glasses in general, and polymer glasses in particular, are not, perhaps surprisingly, technically solid in a crystalized form, but are substances frozen in a liquidlike structure. Many fundamental questions remain as to exactly how glasses form, transitioning from flowing liquid-like state to solid polymer glass. A central factor materials scientists study is the temperature where this occurs, the glass-transition temperature Tg. After some introduction, I will discuss in more detail the recent results of the molecular-dynamics computer simulations of atactic polystyrene (PS), for the bulk and free-standing films, and for both linear and cyclic polymers. Simulated volumetric glass-transition temperatures ([1,2] show a strong dependence on the film thickness below 10 nm [3]. Our studies reveal that the fraction of the chain-end groups is larger in the interfacial layer with its outermost region approx. 1 nm below the surface than it is in the bulk. The enhanced population of the end groups is expected to result in a more mobile interfacial layer and the consequent dependence of Tg on the film thickness. In addition, the simulations show an enrichment of backbone aliphatic carbons and concomitant deficit of phenyl aromatic carbons in the interfacial film layer. This deficit would weaken the strong phenyl-phenyl aromatic interactions and, hence, lead to a lower film-averaged Tg in thin films, as compared to the bulk sample. To investigate the relative importance of the two possible mechanisms (increased chain ends at the surface or weakened p-p interactions in the interfacial region), the data for linear PS are compared with those for cyclic PS. For the cyclic PS the reduction of the glass-transition temperature is also significant in thin films, albeit not as much as for linear PS. Moreover, the deficit of phenyl carbons in the film interface is comparable to that observed for linear PS. Therefore, chain-end effects alone cannot explain the observed pronounced Tg dependence on the thickness of thin PS films; the weakened phenyl-phenyl interactions in the interfacial region seems to be an important cause as well [4]. I will also discuss the interface characteristics of polystyrene in free-standing thin films and on a graphite surface simulated employing an explicit all-atom force field [5]. References [1] Ediger, M.D.; Forrest, J.A. Macromolecules 2014, 47, 471-478. [2] Barrat, J.-L.; Baschnagel, J.; Lyulin, A.V. Soft Matter 2010, 6, 3430-3446. [3] Hudzinskyy, D.; Lyulin, A.V.; Baljon, A.R.C.; Balabaev, N.K.; Michels, M.A.J. Macromolecules 2011, 44, 2299-2310. [4] A. V. Lyulin, N. K. Balabaev, A. R.C. Baljon, G. Mendoza, C. W. Frank and Do Y. Yoon, J. Chem. Phys. 2017, 146, 203314. [5] S. Lee, A. V. Lyulin, C. W. Frank, Do Y. Yoon, Polymer, 2017, 116, 540-548.

When: T.B.A.
What:  On robotics, falling cat, parallel parking and stock trading
Who: Maria Ulan, Linnaeus University
Where: T.B.A.

Abstract: Configuration spaces of many real mechanical systems appear to be manifolds with singularity. A singularity often indicates that geometry of motion may change at the singular point of configuration space. During the talk, I will present one possible solution by considering a certain algebra instead of the configuration space, with a structure completely determined by the geometry of the singularity. We will discussed how one could describe different types of complex motion. We will start with simple examples like linkages, manifolds with corners. Then we will discussed examples with given motion of subsystem. Finally, we will consider some classical reachability problems. At the end of the talk, I will show some applications in industry.

When: T.B.A.
What:  Some methods of approximation by spline functions
Who: Adrian Branga, Lucian Blaga University, Sibiu, Romania
Where: T.B.A.

When: T.B.A.
What: Ideals generated by quadratic forms in the exterior algebra
Who: Veronica Crispin Quinonez, Uppsala University
Where: T.B.A.

Abstract: (joint work with S. LUNDQVIST and G. NENASHEV) There is a longstanding conjecture due to Fröberg about the minimal Hilbert series of C[x_1, ..., x_n]/(f_1,...,f_r), where f_i are homogeneous forms. We introduce the problem and give some results.
Now let E_n denote the Exterior algebra on n generators over C. It is natural to believe that the Hilbert series of E_n/(f_1,...,f_r) should be equal to the conjectured series in the commutative case, if the f_i's are generic forms of even degree. In 2002, Moreno and Snellman showed it to be true for only one generic form f. However, the same year Fröberg and Löfwall gave a counterexample for the case of two generic forms.
We use the structure theory of pairs of skew-symmetric matrices to study the Hilbert function of two generic quadratic forms f and g in E_n. Further, we use combinatorial methods to describe the Hilbert series of E_n/(f,g). Among our results, we have a conjecture for the minimal Hilbert series.