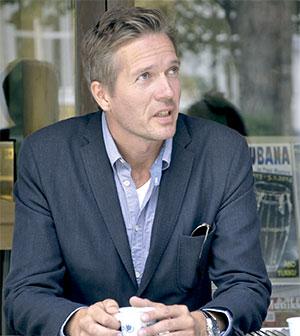 André Jansson is director of the Centre for Geomedia Studies. His research is oriented towards questions of media use, identity and power from an interdisciplinary perspective. His work links various theoretical strands from social phenomenology, human geography and sociology of culture. A particular interest regards the relationship between mediatization processes and the production of social space. Jansson has studied this relationship in relation to a number of contemporary phenomena, such as the post-industrial city, tourism, expatriate lifestyles, surveillance culture and the urban-rural divide.

1. Hot Desks in Cool Places: Coworking Spaces as Post-Digital Industry and Movement (with Karin Fast), which studies the "future of work", and struggles over this future, in relation to so-called coworking spaces in urban settings. The project is funded by the Swedish Research Council (Vetenskapsrådet) 2021-25.

2. Measuring Mediatization - Stage 2, funded by the Ander Foundation (2021-25). The first stage of the project was conducted in 2016-19. The project aims to develop and implement analytical tools based on survey techniques for measuring mediatization processes in everyday life.

Kinetic Élites: The Mediatization of Social Belonging and Close Relationships among Mobile Class Fractions, funded by the Swedish Research Council (2012-2015). The aim of the project was to illuminate the role of media and ICTs for sustaining close relationships and a sense of social belonging under everyday conditions that involve high levels of mobility and potentially fractured ties with family and friends. The focus of the study was on certain mobile élite groups within the fields of (1) corporate business, (2) international development/diplomacy, and (3) academia.

Secure Spaces: Media, Consumption and Social Surveillance. The aim of the project was to map out and provide a deeper understanding of how people today handle various media forms in order to strengthen their sense of security and control, and to clarify how these patterns and experiences are related to overarching social structures. The analyses consist of a combination of survey (the SOM Institute) and qualitative interviews. (Project leader: André Jansson, Karlstad University. Co-investigator: Miyase Christensen, Karlstad University. Funding: Riksbankens Jubileumsfond 2009-2012)

Rural Networking / Networking the Rural: Participatory Culture and Civic Communities in the Swedish Countryside. The project studied how the relationship between marginalization and participation (locally and globally) is experienced and negotiated as part of rural lifestyles and identity work, and how networked media interaction may contribute to a rural participatory culture, as well as to new and pre-existing civic communities. The analyses consist of a combination of survey (the SOM Institute) and qualitative interviews. (Project leader: André Jansson. Co-investigator: Magnus Andersson, Malmö University. Funding: FORMAS, 2008-2011)

Jansson is an elected member of the Academy of Europe (Academia Europaea), section for Film, Media and Visual Studies 2020-.

He is on the editorial board of Communication and the Public; Culture Unbound; MedieKultur, and Tourism and Hospitality.