Podcast dramas that enhance the listening experience through interactive effects have become reality through a collaboration between dramatist Amanda Fromell and computer technology students at Karlstad University. Together they have created a new type of cultural experience in which a smartphone interacts with the contents and for example vibrates in time with heartbeats, becomes warm during a heated dialogue or sends links related to the podcast contents.

“The aim is to offer an art form that everyone with a smartphone can enjoy. I wanted to integrate the contents with effects to reinforce the listening experience,” says Amanda Fromell, dramatist and doctoral student at the Department of Drama and Theatre Arts at the University of Birmingham.
“I have long been interested in how algorithms affect phone users. This project also allows users to see which control phones exert over us.”

Creates critical awareness
Through the app, users can access six audio plays of 4–10 minutes each, which are all about some aspect of algorithmic control over humans, such as online surveillance. After listening to a podcast on location tracking, users may for instance receive text messages suggesting different outfits to wear, depending on the weather at that location. The app is a form of artistic hacking which reflects and use commercial methods, but with the aim of creating critical awareness and giving the public direct experience of the everyday power of algorithms.

Amanda Fromell wrote the podcast dramas and rehearsed them with actors. She then contacted Lothar Fritsch, associate professor in Computer Science at Karlstad University, to find out if it was possible to receive assistance in creating effects that reinforce the contents.

“It’s great that Amanda contacted us,” says Lothar Fritsch. “We have an applied course in which students have to conduct an independent software project, and I thought this project would fit in well. I do research on privacy and how it is undermined online. A lot is happening in this field right now and it’s fun to give students the opportunity to investigate it more closely.”

During the autumn semester, the four students worked part-time on the project, under the direction of Lothar Fritsch and Amanda Fromell.

“It was fantastic to work for a real client while still studying,” says Martin Wahlberg, one of the students who was involved in developing the app. “The most difficult thing was deciding how to organise the code; we were a bit too eager at the start. But the project has taught us so much and it is great to see the final result.”

Amanda Fromell is also satisfied with the collaboration.

“It went really well and the team of students worked on their own. I had many ideas and they came with even more! If I were to do the project again, I would involve the students even earlier.”

The results from the student project were presented on 16 January. The next step is to present the podcast dramas to the public at the NextUp Festival at the Dundee Repertory Theatre in Scotland, which takes place 18–28 April 2019. 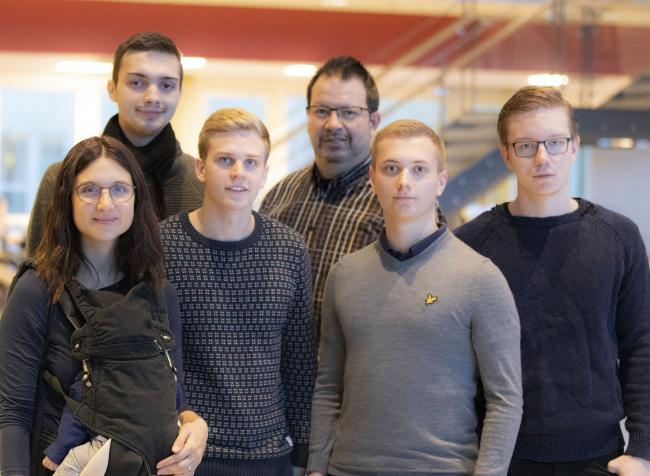