- Perovskite has a significant potential as a photovoltaic material with high power conversion efficiencies, says Ellen Moons, professor of Physics who is heading the research. We have recently recruited two postdocs to our research group, both of whom have written their theses within this field, and extend our solar cell research with a new direction.

Despite the high efficiency and low cost, commercialisation of perovskite solar cells is held back by problems related to stability, scale and toxicity concerns. The stability towards moisture and light is crucial, and thereby an urgent research area. In order to protect against moisture and prevent degradation, the solar cells are sealed and encapsulated. Beyond this, the inherent stability of the perovskite material must also be improved.

Two new postdocs - how did you end up in Karlstad?

- After receiving my PhD at Indian Institute of Technology in Bombay, I started to look around for postdoc jobs, says Shivam Singh, postdoc in Physics. I found an advert for the postdoctoral position at Karlstad University through the European Commission homepage. The projects are very relevant to my research interests. I applied and was offered the position by Karlstad University. The pandemic made the process long, but one day I received a message from Sweden, stating that I had been granted a residence permit. In terms of material characterisation, the research at Karlstad University is very different from what I did during my doctoral studies. This is why a postdoc position at Karlstad University is an amazing opportunity for me to acquire new skills and experiences that will be of long-term benefit for me. I have been here in Karlstad for a couple of months now, and I am very happy with my choice.

- It was pure coincidence that I discovered Karlstad University, says Paulo Marchezi, postdoc in Physics. I worked at the University of Campinas in Brazil when I saw a tweet from Ellen Moons about the postdoc advert, and I thought I had the expertise needed for the position. I investigated further and found it to be an ambitious project that I would like to be a part of. Beyond that, the research conducted by the group in Karlstad caught my attention. I was very happy when I was offered a postdoc position and so far Karlstad University feels completely right for me.

- Among other things, we examine how to make the most of the potential of perovskite, says Shivam Singh. Currently, crystalline silicon based solar cells dominate the photovoltaic market, however, they fail to efficiently utilise the high energy part of the solar spectrum. Such solar cells can become more efficient if another kind of solar cell is stacked on top of them, building a tandem solar cell. Perovskite material has the ability of high performance, tunable bandgap, easy processing, and low cost fabrication, which makes it a perfect candidate for tandem solar cells. We are now looking into how we could build perovskite tandem solar cells, that absorb a wider range of energies from the solar spectrum and gain an increased effect and stability.

In recent years, perovskite material has become very popular within solar research, thanks to it being inexpensive to manufacture while also being an excellent converter of solar energy into electricity. Of particular interest its use in high-performance tandem solar cells together with other solar cell technologies, which to a certain degree are already in production. The perovskite used in solar cells has the same crystal structure as the mineral calcium titanate (CaTiO3), but a different composition. It was first discovered by Gustav Rose in the Ural Mountains in Russia in 1839, and it is named after the Russian mineralogist Lev Perovski (1792–1856).

The research is partly conducted within the project Lasergraph, which is a European collaboration financed by Vinnova. It is connected to Graphene Flagship, which coordinates approximately 170 academic and industrial research groups in 22 countries. The other part is conducted within the project PERDRY, which is a transnational collaboration within the SOLAR-ERA.NET programme. The Swedish part of this, which includes both Glava Energy Center and the company Sticky Solar Power, is financed by the Swedish Energy Agency. 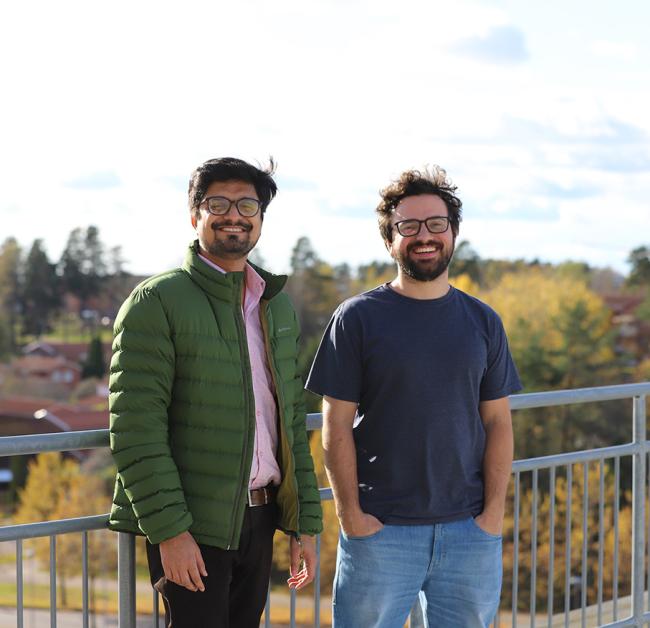 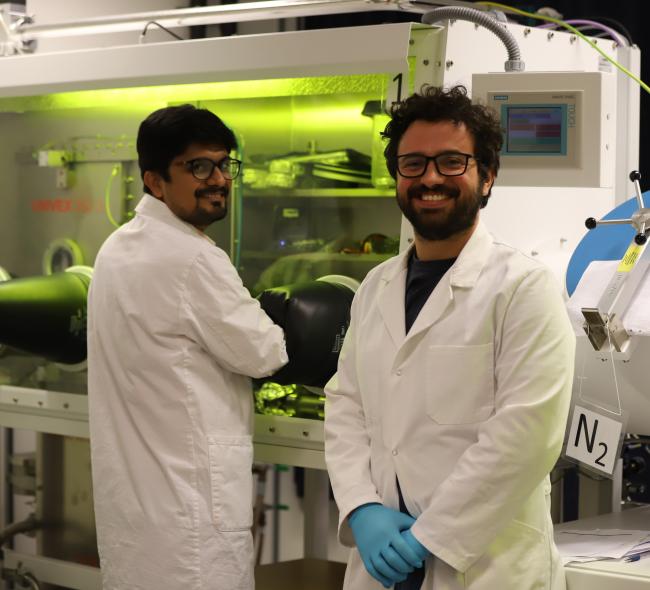 Shivam Singh and Paulo Marchezi in the lab.

Shivam Singh and Paulo Marchezi in the lab.