The research on organic solar cells at Karlstad University takes another step forward, thanks to a research grant from the Swedish Research Council.

- We are going to study the molecular interactions between the electron donating and the electron accepting molecules, says Ellen Moons, Professor of Physics and leader for the research project. We believe that this interaction is crucial for both the structure formation and charge transfer at the interface between donor and acceptor, and that it affects the efficiency of the solar cells. We are very happy about this research grant, which contributes to the funding of a doctoral student as well as an increased collaboration between experimental and computational research in Physics. We have previously investigated the internal nanostructure of the solar cells, but in this project we want to manipulate this structure and the properties through molecular interaction.

The technology of organic electronics is based on the idea to make semiconducting materials by mixing a specific type of molecules in a solvent that you spread out in a thin layer, which is then left to dry. This is how organic solar cells are fabricated. Two different kinds of molecules are needed - those that donate electrons and those that accept them. Up until a few years ago, organic solar cells could reach an efficiency of approximately 10 percent. This means that 10 percent of the power from the sunlight that hits the solar cell is converted to electrical power. But that is not enough. A few years ago, however, a Chinese research group synthesized new type of acceptor molecules that made organic solar cells more efficient and today power conversion efficiencies of 18 percent have already been reached. To improve the efficiency even more, we need to better understand how these new molecules distribute in the layer, as well as how both donor and acceptor contribute to the absorption of the sunlight and the generation of electric current.

- We have previously studied how the drying process affect the inner structure and properties of the layer. In this project we want to manipulate the structures afterwards, for example by exposing the layer to solvent vapour. Our research team consists of chemists and physicists. The computational team members work on creating computer models of the molecules and simulation tools to optimise structures and properties. The chemists optimize the molecular solutions to build those specific structures in the layer, and the experimentalistal physicists use advanced instruments to visualize the small structures that we can't see with the naked eye but are vital to the solar cell efficiency.

The Swedish Research Council have awarded the research on organic solar cells a grant of 4.056.000 Swedish kronor over a period of four years, until the end of 2025. 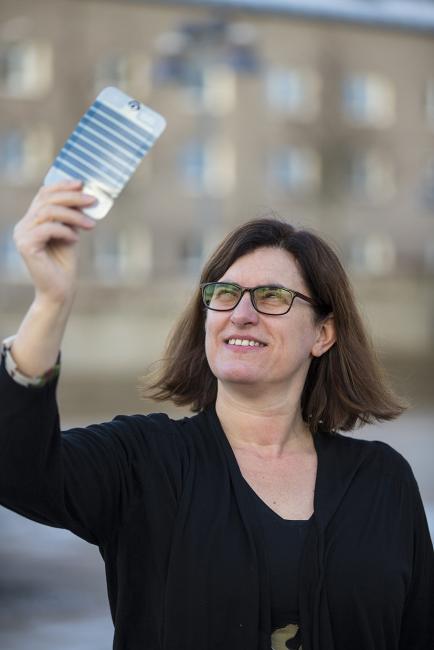