Alarmism and optimism in climate communication

The climate movement groups Fridays for Future and Extinction Rebellion aim for the same goal while using different methods. Sol Agin, who recently completed her PhD in media and communication studies, has focused her research on their way of communicating about an extremely complicated subject.

When Swedish people speak up on behalf of the environment, they prefer to do so in the form of peaceful protests inspired by Greta Thunberg’s work with Fridays for Future. Further south in Europe, things can get a bit more heated. The action group Extinction Rebellion aim for the same goal but attracts more hands-on action.

In her thesis “Communicating climate action: Combining action repertoires and linguistic repertoires in social movement message construction”, Sol Agin apply her own theoretical concept Communicative Action Repertoire (CAR) in order to investigate whether different groups of climate activists need to communicate in line with their actions. CAR is a concept constructed by Sol Agin alone.

- My theoretical concept goes all the way back to the rhetoric, Sol Agin explains. As a communicator in a matter, you need something that is appropriate in the context that you are in. For example, you would not hold a speech at a funeral with a big smile on your face. Nor would you be able to captivate a large crowd by only using a number of logos arguments. You need emotions as well. When something is as basic as matching words and action, one might think that there would already exist a concept to describe it. But there is no such concept, so I constructed CAR for my thesis.

In concrete terms, Sol Agin took a whiteboard and drew circles to figure out what theories to use and how they overlapped. CAR was what emerged at the centre of the chart. The challenge was to find a way of clarifying the overlaps so that it would make sense to others as well.

Communicating climate change is challenging. The subject is complex, abstract and based principally on science. Getting the general public on board is difficult and there are plenty of conspiracy theories that continuously make the subject even more vague for the recipient. In addition, they are spread by individuals with great power. In short, it is not easy to talk about environmental issues in today’s communication channels.

- It is a complicated subject to convey to an audience that is not necessarily familiar with all the scientific concepts and who may also be unaccustomed to reading tables and figures and understanding what they mean, Sol Agin explains.

- What I found in my research is that it becomes problematic if you communicate a message and do not consider the way in which you are communicating based on who you are as a sender. Add the recipient’s preconceived notions and expectations on you as a sender and it becomes even more complex. All of these factors may affect how the recipient perceives your message. Even if Greta Thunberg means well when she says “Listen to the scientists” it is far from everyone who are able to do so. It is not always easy to understand what scientists are saying.

Sharing climate communication is easy. Getting the recipients to actually care is a completely different matter. Sol Agin believes that the climate issue needs a new angle of approach to get going again.

- What we are seeing today is a form of climate fatigue. Yes, the climate is going to hell but we have been aware of this for the last thirty years. News reports increase when, for example, half of Australia is on fire. Or when someone like Greta Thunberg shows up. This gives media a new angle to tell their stories, something which people are not yet used to and filter out. When the fires temporarily go out and Greta goes from being a protesting child to a young woman that we have become used to seeing and hearing – well, then the interest wanes. I am speculating a bit now, but novelty plays a part in the climate change debate, as it does with everything else. When even I who have a keen interest in the subject finds it boring to read news about EU referenda it means that it will be challenging to get people who are less familiar and interested in the subject involved and demand change. If you have a group of politicians who should act, you need to put some form of pressure on them to show that it is an important issue for their constituents. In other words, it is not just the subject that is complex but the entire system surrounding it as well.

What about the people who will be voting for the first time in September, for four years they have been following Greta Thunberg and become well aware of the climate change issue. Shouldn’t that be reflected in the way this group votes?

- Yes, but I think that depends on how knowledgeable they really are about the subject and how well they can see the connections between the climate and politics. Many young people care about the climate but can they see the difference between ambitious, but perhaps empty, climate promises and less grand, yet more feasible, actions? And then there is the question of what consequences the promises politicians make and implement have on the voters’ everyday lives. As humans, we can be somewhat egotistical and it can be difficult to determine how we choose to prioritise when it comes to sacrificing something we like for the greater good.

Would it have been better for the climate change issue if Greta Thunberg were red-hot right now?

- Yes, I think so. At least for first-time voters. But she might also have scared off some other voters due to the fact that she was perceived by some as a annoying teenager who was just “nagging”. It is what we usually refer to as cognitive dissonance – you know it is bad for you to smoke and eat junk food, but you do it anyway. It is the same thing with the climate. I know that I should stop doing certain things but I keep doing them anyway. When someone nags you about how bad it is, well, you will probably stop listening. My hope is that people will think more carefully about who they are as communicators and what is expected from them as communicators based on who they are in order to avoid creating gaps between words and action. Cognitive dissonance is very difficult to break, but we can always try not to make it worse. That is, not say things that go against what the intended audience expects based on who the communicator is. You can push the boundaries a bit to break through what people filter out. But only a little in order not to increase the dissonance between words and action.

What are the main conclusions that you draw from your thesis?

- I have seen clear tendencies that Extinction Rebellion are rewarded when they send out alarmistic messages and Fridays for Future are rewarded for optimistic messages. Their communication becomes more credible and reliable the more the use of language and type of action align. It is possible to connect the alarmist language use to the more disruptive type of actions and the optimistic language use to the more conventional type of actions. I was able to detect that when Extinction Rebellion sent out an optimistic message, they were perceived as being more sensation-seeking and more biased. And the same thing but in reverse applied to Fridays for Future. That is interesting.

When it comes to dissemination of information and action, my research shows further interesting findings. The groups operating within the environmental movement seem to have different roles of which they are not necessarily aware. When Fridays for Future sends out messages, the recipients tend to be more likely to share the information, while the recipients are more likely to take action and take to the streets themselves when Extinction Rebellion sends out information. Both groups want to save the planet but they have very different approaches. Once again, it has to do with what the receiver expects from the sender and the set of values you have. It is not the easiest thing for an activist group to find their own specific target group among the general public. Especially not when the general public, put in simple terms, includes all of humanity.

So what would a great and broad message look like to create maximum effect?

- I think it is difficult, if not utterly impossible, to create a universal message that works everywhere. But it seems to be a good idea to be aware of what the recipients expect from you. This allows you to align your communication with those expectations and thereby reach your target audience. As a simplified generalisation, you could say that Extinction Rebellion should emphasise alarmistic messages and not let go of that to remind the recipients of solutions. Solutions are what Fridays for Future should stand for. There is, in other words, a need for different groups and approaches to capture different parts of the target group and reach a broad audience.

How would you like your results to be used?

- Since I have written an academic thesis, my intention and hope is that my theoretical concept can inspire other researchers to conduct new studies based on my work. Or contribute with something entirely different based on an idea inspired by my work. The primary aim is to contribute to research progress. However, the thesis has a level of social relevance and, to the extent that you can break the rules of the genre, I have tried to write it so that an activist can read it and find inspiration and new ways to communicate about the climate crisis we are facing.

Sol Agin is the first Geomedia-funded PhD student to graduate at Karlstad University. 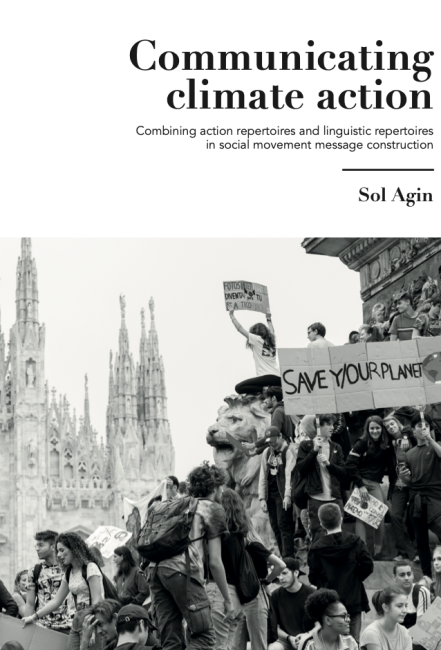