How do academics react to the increase of private sector inspired management in universities and higher education institutions? What strategies are used to adjust – or resist? In a new thesis in working life science at Karlstad Business School, Jo Ese, Østfold University College, describes the conflict between academics' values and ”management”.

Academic freedom and university independence are fundamental values to most researchers as well as the guarantees of sound research. But higher education is also part of a public sector in which governance and management systems are often based on private sector logic. ”Management” increasingly permeates the daily life of researchers too. In his thesis ”Defending the university? – Academics’ reactions to managerialism in Norwegian higher education”, Jo Ese discusses several examples of how academics resist the system:

•"Hiding" and being unavailable to supervisors, colleagues and students to create research space.
•”Playing ignorant”, i.e. pretending not to know or understand to manoeuvre around "impeding" strategies, policies and guidelines.
•Pretending to be unaware of or simply ignoring established procedures, controls and guidelines.
•Overachieving – doing more than expected, for example, providing more supervision to students than the allocated hours, putting more hours on preparing a course than allocated. In this regard, academic resistance differs from other areas of work.

Culture of silence, but growing debate
In the course of his studies, Jo Ese carried out deep interviews with 25 researchers at several Nordic higher education institutions.

"There was clearly a culture of silence at the universities and a reluctance to criticise the system. Several interviewees did not want to speak openly and anonymisation was an important condition for my investigation. Yet, there was also a great need to talk about the conflict between control systems and the teaching and research mission. In recent years the debate has intensified in Norway as well as in Scandinavia and countries such as Great Britain and Australia," he says.

The thesis systematises and describes the nature of the conflict between management/control/administration and teaching/research in higher education and how it is manifested.

"It is a resource and energy consuming conflict. I don't present any quick-fix in my thesis, but it's important to sort out what underlies the conflict and why it arises. Not until then can we begin to see possible solutions. The systems are usually there for a good purpose, for instance to ensure transparency and control of operations funded by public means," says Jo Ese. 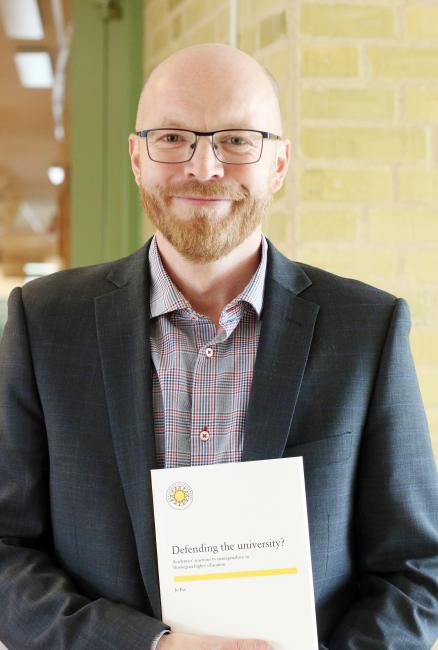 In his thesis ”Defending the university? – Academics’ reactions to managerialism in Norwegian higher education”, Jo Ese discusses several examples of how academics resist the system.

In his thesis ”Defending the university? – Academics’ reactions to managerialism in Norwegian higher education”, Jo Ese discusses several examples of how academics resist the system.