When the Swedish Defence University and The Swedish Civil Contingencies Agency (MSB) arranged the contest Cyber Challenge on Thursday, 6 February, 14 teams of university students vied to prove that they could act as the best experts on national security. The team from Karlstad called TrollControl performed well and reached the semifinals.

“It was an enjoyable experience and we were really challenged to make important decisions quickly, says Michaela Padden,” a doctoral student in Political Science and one of the TrollControl team members. “However, I think we did a good job and our team communicated well.”

Before the contest, all teams were given a scenario to start out from. The scenario was a simulated cyber attack on the power distribution grid which began with espionage and then escalated into power outages in big cities. The task of the competing teams was to act as consultants and develop guidelines for crisis management in relation to cyber attacks at the national level.

“On the day of the contest, we presented parts of the report that we had prepared for the competition,” says Michaela Padden. “The report described for instance how we analysed the attack, tried to identify the attackers, and evaluated risks. The presentation was assessed by a jury of representatives from universities, authorities, and businesses involved in issues of national security and cyber security.”

The course Perspectives in Computer Science provided the foundation
Apart from Michaela Padden, the team included Maher Shaker, Sebastian Olars, and Jonathan Hillbom, who are students in the final year of the Master of Science in Computer Engineering programme. During the fall, Shaker, Olars, and Hillbom took the course Perspectives in Computer Science, which covers technology and its ethical consequences in society, for instance in relation to cyber warfare, digital surveillance, and digital propaganda. The course was taught by Associate Professor Lothar Fritsch, who also supervised the team while they prepared for the contest and joined them in Stockholm.

“I am quite satisfied with the performance of the team, especially since one of the team members was unable to take part in Stockholm due to illness and we had to make last-minute changes in the presentation,” says Lothar Fritsch. “Unfortunately, we were a bit out of luck in the final round when the focus was on political coordination in a crisis situation rather than digital defense, which was probably our forte.”

Great interest in students with cyber security knowledge
In connection with the contest, there was a small career convention where businesses and students could discuss future jobs. There is no doubt that cyber security qualifications are sought after on the job market.

“It was interesting to see the range of businesses and organisations interested in cyber security. They were very interested in connecting with students taking part in the contest, especially those of us studying Computer Science,” says Michaela Padden.

About the contest
Cyber Challenge is aimed at students studying at universities or other higher education institutions. Students apply in teams of four, and each team recruits a coach who is a faculty member at their university. In order for teams to be successful, they are advised to team up across departmental and disciplinary borders. Students from different universities or higher education institutions cannot form teams, however - each team must consist of students from the same university. The three top teams will represent Sweden in Cyber Strategy Challenge 2020 in Geneva, Switzerland. This year’s top three were Cypherphunks from Stockholm University, the White Hats from Lund University, and Orion from the Swedish Defence University. 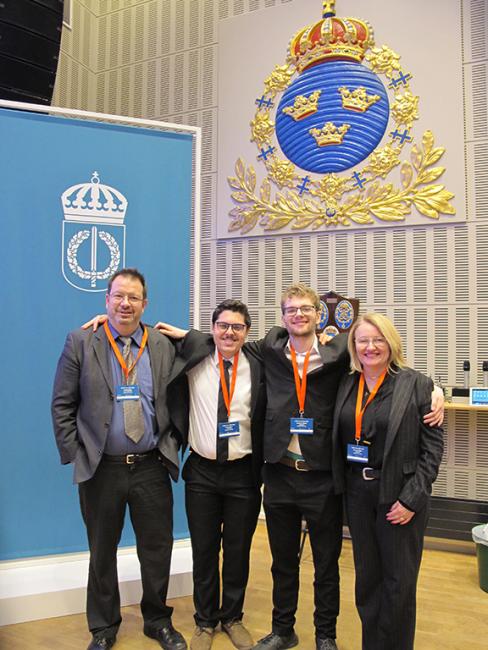 TrollControl, representing Karlstad university. From the left: Lothar Fritsch, Maher Shaker, Jonathan Hillbom and Michaela Padden. Sebastian Olars, is not in the photo due to illness on the competition day.

TrollControl, representing Karlstad university. From the left: Lothar Fritsch, Maher Shaker, Jonathan Hillbom and Michaela Padden. Sebastian Olars, is not in the photo due to illness on the competition day.