The future of a digital Värmland is taking shape

Some are talking about it, some are making good progress, and some are at the forefront. Different forms of digitalisation are at the top of the agenda, especially now in connection with the pandemic. Working deliberately with digitalisation is a key factor today for the competitiveness of industries and businesses as well as effective public services and enhancing the good quality of life for many.

As part of the EU project Digiterri, Värmland collaborates with two other European regions to support digital development. The first of three workshops has now taken place, and a vision for a digitalisation strategy for Värmland is beginning to take shape.

"The project Digiterri can hopefully contribute to speeding up the digitalisation process in Värmland a bit, not least through collaboration with two other regions in Europe, says Håkan Spjuth at the External relations office, Karlstad University."

For many businesses and organisations, digitalisation is the key to survival and an essential development in the future. Digitalisation is increasing in education, in healthcare, and in our private lives. Not least during the pandemic, we have taken giant steps in the transition process towards virtual meetings, online shopping, and working and studying at a distance. At the same time, there are many challenges related to technology development and know-how. Necessary infrastructure will have to be in place before the smart solutions can be introduced and maximized and all citizens will have to be included in the digitalisation effort.

With inspiration from French business cluster Materalia and Uddeholm, the world-leading producer of tool steel, among others, more than 40 participants from different branches, businesses, and organisations discussed a vision for developing a digital Värmland. What are the needs? What is lacking? Keywords such as network, openness, competence, inclusion, and collaboration were identified in several groups taking part in the workshop.

Networking and collaboration lead to knowledge
The importance of sharing knowledge and experiences was highlighted by a number of groups in the workshop. A concrete example, which is already underway, is the exchange of experiences between Volvo in Arvika and Uddeholm in Hagfors that provides inspiration and generates new knowledge across the boundary between two different branches of industry.

"Digitalisation means a major transformation of the basic industry, but now it is really picking up speed. An important key to success is to make sure that everybody in the organisation – from the workers on the floor to senior management – are included", says Reine Lundin, CDO and Chief of IT Security at Uddeholm, previously a researcher in computer science and a Dean of the natural sciences and technology faculty at Karlstad University.

The next step in the process is to compile the results from group discussions and then proceed towards the future of a digital Värmland in the next workshop, which will take place 16th of March. This workshop will develop a roadmap that will move the agenda as set out in the vision. It is important that the Digiterri project engages with the regional actors and that the process is set with their needs, opinions and future being central.

The EU project Digiterri includes the regions Värmland in Sweden, Styria in Austria, and Grand Est in France. The project uses RRI, Responsible Research Innovation, which is a method for socially, economically, and environmentally sustainable development. In Värmland, the project is managed by Karlstad University, Paper Province, and Region Värmland. The coordinator of the project as a whole is the Austrian Institute of Technology in Vienna.

Read more about the project at digiterri.eu 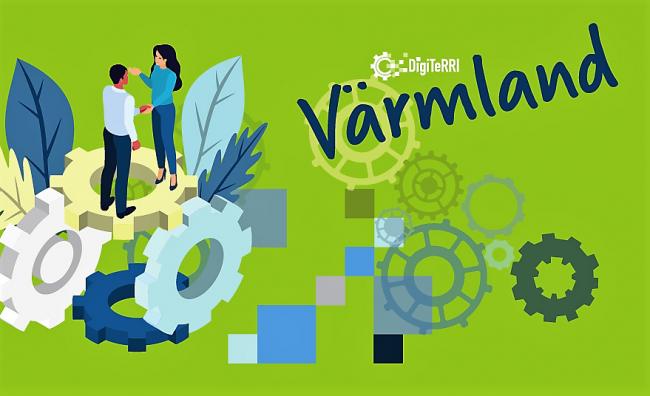 As part of the EU project Digiterri, Värmland collaborates with two other European regions to support digital development through an RRI approach.

As part of the EU project Digiterri, Värmland collaborates with two other European regions to support digital development through an RRI approach.