Three projects at Karlstad University are the recipients of EU funds to a sum of 21 million SEK. The decision was made by the North Mid-Sweden Structural Fund Partnership on 15 December 2016.

”We are very pleased with this decision of the North Mid-Sweden Structural Fund Partnership. The funds will contribute to strengthening research at the university and the continued development of Värmland,” says Åsa Bergenheim, vice chancellor.

The three projects will receive additional funds from the Academy of Smart Specialisation, the joint venture between Karlstad University and Region Värmland, aiming to utilise research for industry in Värmland, the county council and the municipalities, as well as strengthening the research environment at Karlstad University. The total sum for the three projects is 52 million SEK.

AT-LAB regional laboratory for additive manufacturing aims to implement new resource effective and environment-friendly manufacturing techniques in regional companies in Värmland. Together with his colleagues, Pavel Krakhmalev, professor of mechanical and materials engineering, will work towards increasing the number of companies using the method. This will increase company competitiveness and contribute to the future innovation and development potentials in the Värmland industry.

The project Research Environment for Sustainable Forest-Based Bioeconomy, under Lars Nilsson, professor of environmental and energy system, aims to contribute research-based knowledge to ensure that private and public actors are prepared for future needs of new biomaterials and renewable bioenergy.

The project Solar Värmland, under Markus Rinio, professor of physics, will support the transition to a low-carbon economy. Project activities will attract more solar energy companies to the region and will be strengthen education in the area of renewable energy engineering at Karlstad University.

“After the partnership agreement between Region Värmland and Karlstad University was made at the end of March in 2016, we have now established eight projects with a total project value of around 70 million SEK, covering all the prioritised areas in the Academy of Smart Specialisation. Besides running these projects, a further four-five projects will hopefully be established during 2017”, says Håkan Spjuth, head of External Relations at Karlstad University and the university’s responsible coordinator for the Academy of Smart Specialisation.

About Academy of Smart Specialisation
The concept ”Smart specialisation” involves finding areas in which a region is already strong and where there are opportunities to be internationally competitive. In Värmland’s research and innovation strategy for specialisation, a sub strategy to the Värmland strategy, six such areas are identified:
- Value-creating services
- Forest-based bioeconomy
- Digitalisation of welfare services
- Advanced manufacturing and complex systems
- Nature, culture and digitalised experience of place
- Systems solutions with solar energy
These six areas form the basis of Academy of Smart Specialisation, which is jointly by Karlstad University and Region Värmland with the purpose to function as a meeting place for researchers, companies, public actors, financiers, and entrepreneurs. By linking research, innovation and education, the Academy can also help preparing students graduating from Karlstad University to go into regional employment and continue developing the six priority areas. 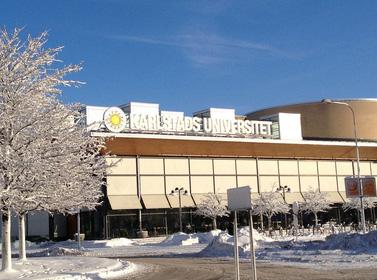