Solar cell researchers from Karlstad University have once again conducted experiments in zero gravity during parabolic flights in Bordeaux, France. The aim is to study how the structure of the active layer of the polymer solar cell is formed, to thereby be able to increase its efficiency.

– This is the second time we have conducted experiments during parabolic flights, says Jan van Stam, Professor of Physical Chemistry at Karlstad University. We are studying the transition from solution to thin, solid film that constitutes the active layer of the solar cell, where the sunlight is converted into electricity. When you remove gravity, structure formation slows down. This makes it possible for us to, in more detail, study how the structure of the material changes. If we can understand and control that process, we can find an easier and more controlled way of manufacturing efficient polymer solar cells.

– Me and Leif went to Bordeaux ahead of time with the lab equipment, which is custom made to be used in this kind of experiments, says Jan van Stam. Ishita and Paulo joined later. They were the team’s aeronauts, who conducted the experiments during the parabolic flights, while Leif and I handled ground support.

The aim was to follow-up on the results from the previous flight in 2018 and to try out the improved equipment designed in collaboration with Université Libre de Bruxelles. The new technology added to the equipment is called Schlieren monitoring, which makes it possible to examine the drying process in real time. The results will now be evaluated ahead of the upcoming experiments that will be conducted in an unmanned sounding rocket. The experiment planned for late autumn 2023 provides microgravity for six minutes, which is a lot more than the 20-25 seconds you get on the planes.

– This means that we can perform more advanced experiments, which will hopefully give us clearer answers to questions about the structural formation, says Jan van Stam.

To gain access to the parabolic flight environment at the Novespace facility, the project needs to be scientifically approved – and the competition is tough. At the facility in Bordeaux, flights are carried out twice each year, on behalf of ESA, the European Space Agency, with several research teams on board. The flight begins with a steep climb, followed by a free fall where gravity is close to zero for a brief period. During this time, the experiment can be completed without being affected by gravity.

The Swedish National Space Agency funds the project and is a government agency that operates under the Ministry of Education and Research with responsibility for state-funded national and international space operations in Sweden. 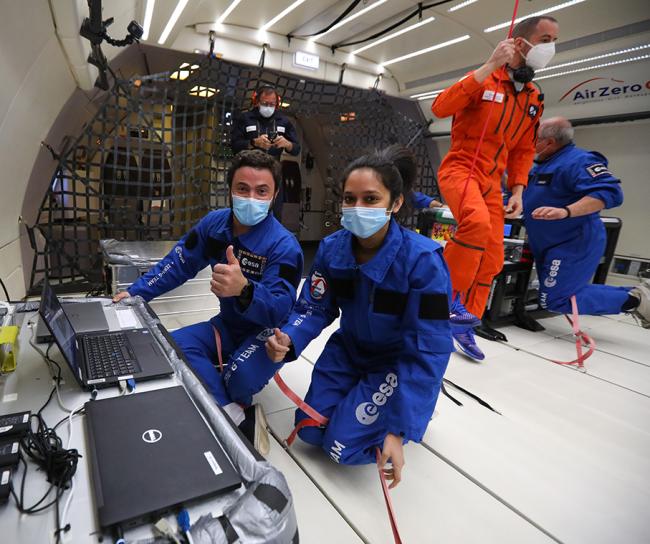